LEAVING NO ONE BEHIND – THE WAY FORWARD: MERITOCRACY 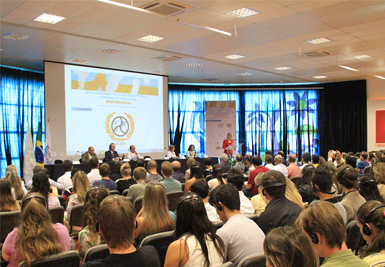 On 16th and 17th February 2014, the international conference “Leaving no one behind – The way forward: meritocracy” was held in Recanto Maestro (Brazil), at the Antonio Meneghetti Faculdade (AMF). The event was organised by the International Ontopsychology Association (AIO) and the AMF.

Experts from the United Nations (UN), members from the local administration and the Brasilian government, and representatives from the AIO, the AMF, the Brazilian and Russian Antonio Meneghetti Foundations took part in the debate on the world’s problems in achieving the 8 Millennium Development Goals (MDGs), and on the continuation of this work after 2015.

Last year, the AIO, in collaboration with the United Nations Alliance of Civilizations (UNAOC ), organised an event to illustrate all of the ecobiological projects realised in the world by Professor Meneghetti. That event – “From Lizori to Diostan: Civilizations in progress, through cultural diversity and MDGs achievement” – was strongly supported by Prof. Meneghetti and was held in Lizori (Italy) on the 22nd March 2013. The title of that conference was not chosen by chance; in fact, Lizori, in Italy, was the first of these projects realised by Professor Meneghetti, whereas Diostan, in Russia, was the most recent one. Lizori and Diostan represent the starting and the ending points of a long journey that Professor Meneghetti wished the experts from the UN could see by showing them all of the other projects undertaken between Lizori and Diostan over the years within a series of initiatives aiming at the achievement of the MDGs.

The conference organised in Recanto Maestro is part of the realisation of professor Meneghetti’s wish. The UN delegation included Hanifa Mezoui, representative of the International Association of the Economic and Social Councils and Similar institutions (AICESIS), Andrej Abramov, Head of the Non-Governmental Organizations Section of the United Nations Economic and Social Council (ECOSOC), Hasan Ferdous, vice-head of “Academic Impact” (that is a UN Initiative, which brings together higher education institutions with the aim of actively supporting the ten universally recognized principles about human rights, literacy, sustainability and conflict resolution), Francis Loriot, human rights and corporations social responsibility specialist, and Jacylyn Shi, representative of the project “Vision 2050 Shanghai Sustainability Forum.”

Following this event, AIO was invited to take part in the ECOSOC roundtable with the UN High Representatives and the Civil Society in Munich on 23r April 2014 titled “Addressing ongoing and emerging challenges for meeting the Millennium Development Goals in 2015 and sustainable development goals in the future.” On that occasion, the President of the AIO – Dr. Pamela Bernabei – presented the founding principles of the Corporate Social Responsibility (CSR) model that Professor Meneghetti has applied in the ecobiological centres he created around the world.

The event organized on 16th February 2014 in Recanto Maestro became the subject of a Written Statement that the AIO sent to the UN Secretary General and was accepted in the 2014 High Representative Substantive Session of the ECOSOC, which then translated and published it in five languages other than English (Russian, Arabic, Spanish, Chinese, French) and distributed it to UN member states.