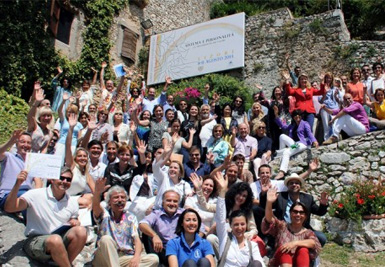 “Image and Dream” is the theme proposed for the 2015 edition.

“SYSTEM AND PERSONALITY – THE TRANSMISSION OF VALUES”:

Four days of intense study (with eighteen lecture-conferences, as well as moments of practical in-depth study), in the industrious and dynamic genius loci of the Medieval village Lizori, in the centre of Umbria and Italy.

The chosen theme – “System and Personality – The Transmission of Values” – for this Summer edition is also in keeping with a “return to origins”; in fact, it brings us back to some radical questions, such as resolving the individual-society dyad, related to ontological goals or to reason of being. The realisation of individual in full consistency with hr/his own project of nature – that is the thesis behind Ontopsychology – to guarantee development of the society, and promoting a “system” that, other than just playing the game of stereotypes, works to service humans instead of acting against them. Therefore, the problem begins with the responsibility of the individual, and moves to the appropriateness of a system that becomes able to provide a reciprocity of functional values, from the pedagogy to the application of justice, from the dimension of family to the one of mass media, and so on.

Educators, doctors, philosophers, social workers, journalists, magistrates: talks from a varied group of speakers and projections of forward-looking video-lectures of Professor Meneghetti from previous conferences – the first edition of the essay from which this Summer edition took its name was written decades ago – alternated during the four study days. The video-lectures showed open ontopsychology sessions, cinelogies, lectures and cultural cocktails all led by professor Meneghetti. With the complicity of a place – the medieval village Lizori – with a strong impact power and the harmony of a living and regenerating nature permeated by art and superior aesthetics. This millenary village was adapted using new interactive communication technologies connecting the different locations where parallel works were held simultaneously for the best comfort of the participants. Conference rooms in ancient houses, verandas on the valley, artisan crafts re-designed for the purpose, with company of the stones, the pebbles, the paintings and sculptures along the ways, glimpses of paradise from sunshine to sunset. People of all nationalities determined to give their best to themselves and to their world to convey values, in a place where system and personality can communicate and exchange coordinates.